No one has the right to obey, Hannah Arendt famously stated, and there are plenty of ways to disobediently rebel for life! So our idea was to create a series of Instragram posts about different Civil Disobedience Actions.

The actions grouped into the following categories:

Brush-Actions are all about creating a counterculture and placing disobedient art in public. Did you witness one? Post it on Instagram and tag it with #rebellionbrush.

Hover or tap-hold on the images to read more. 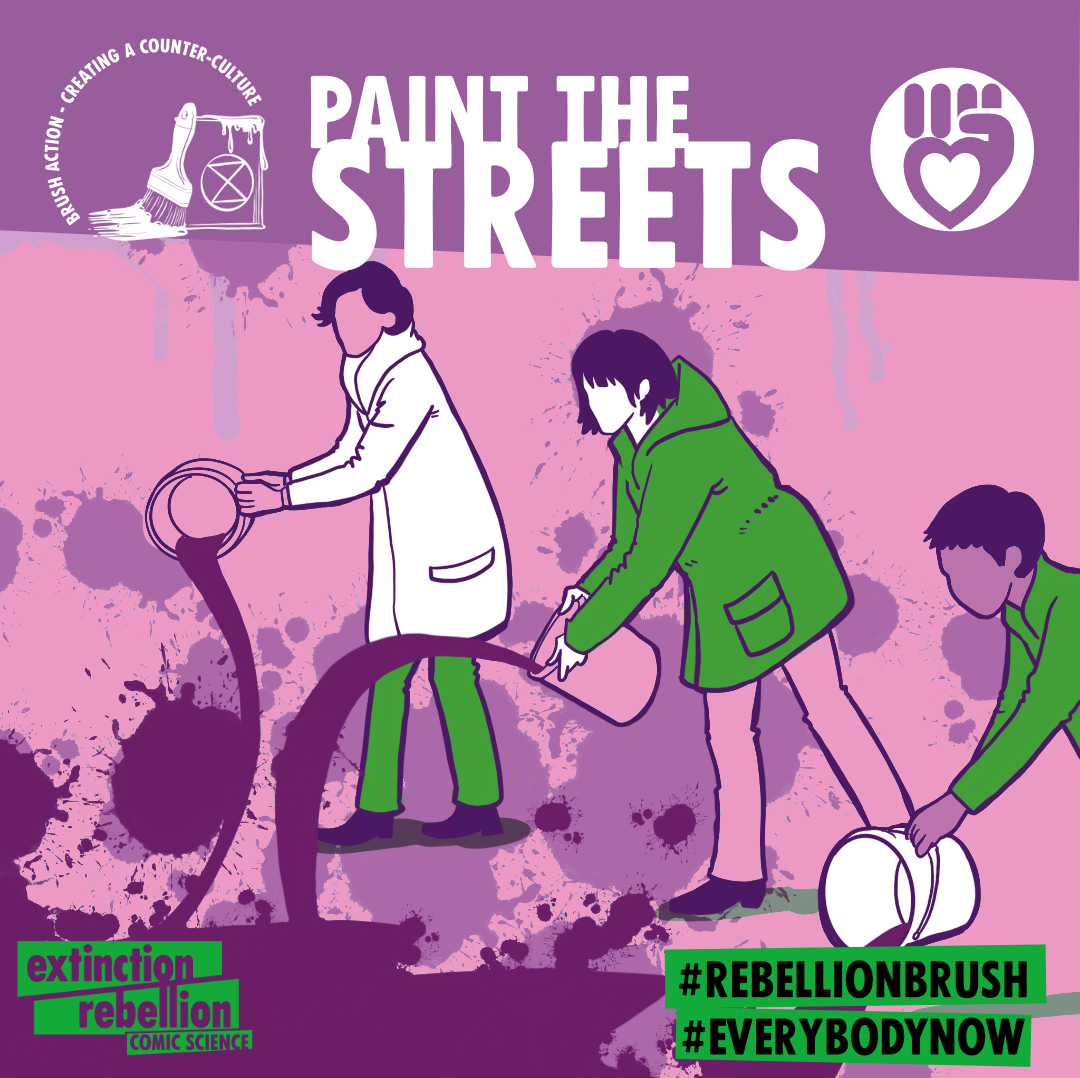 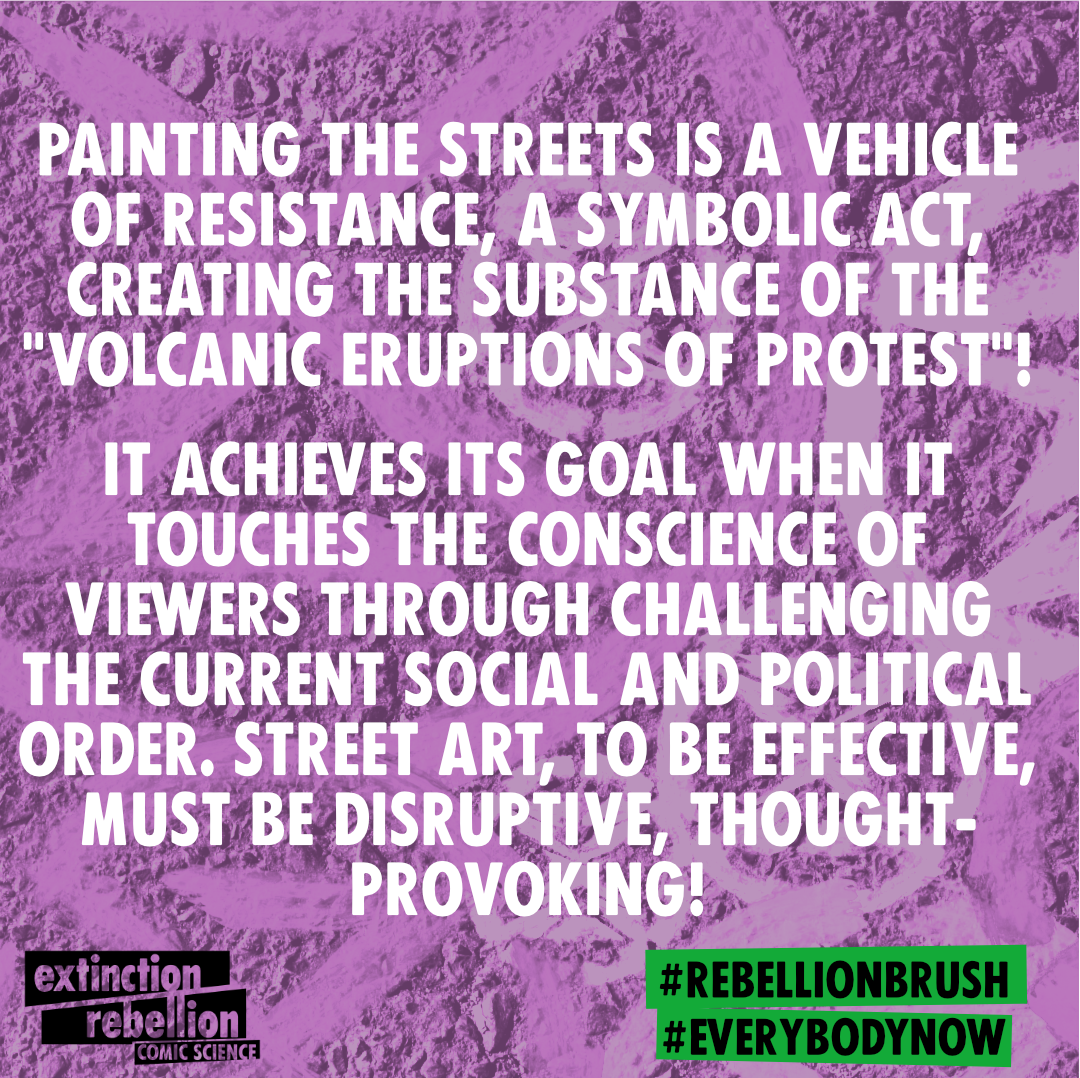 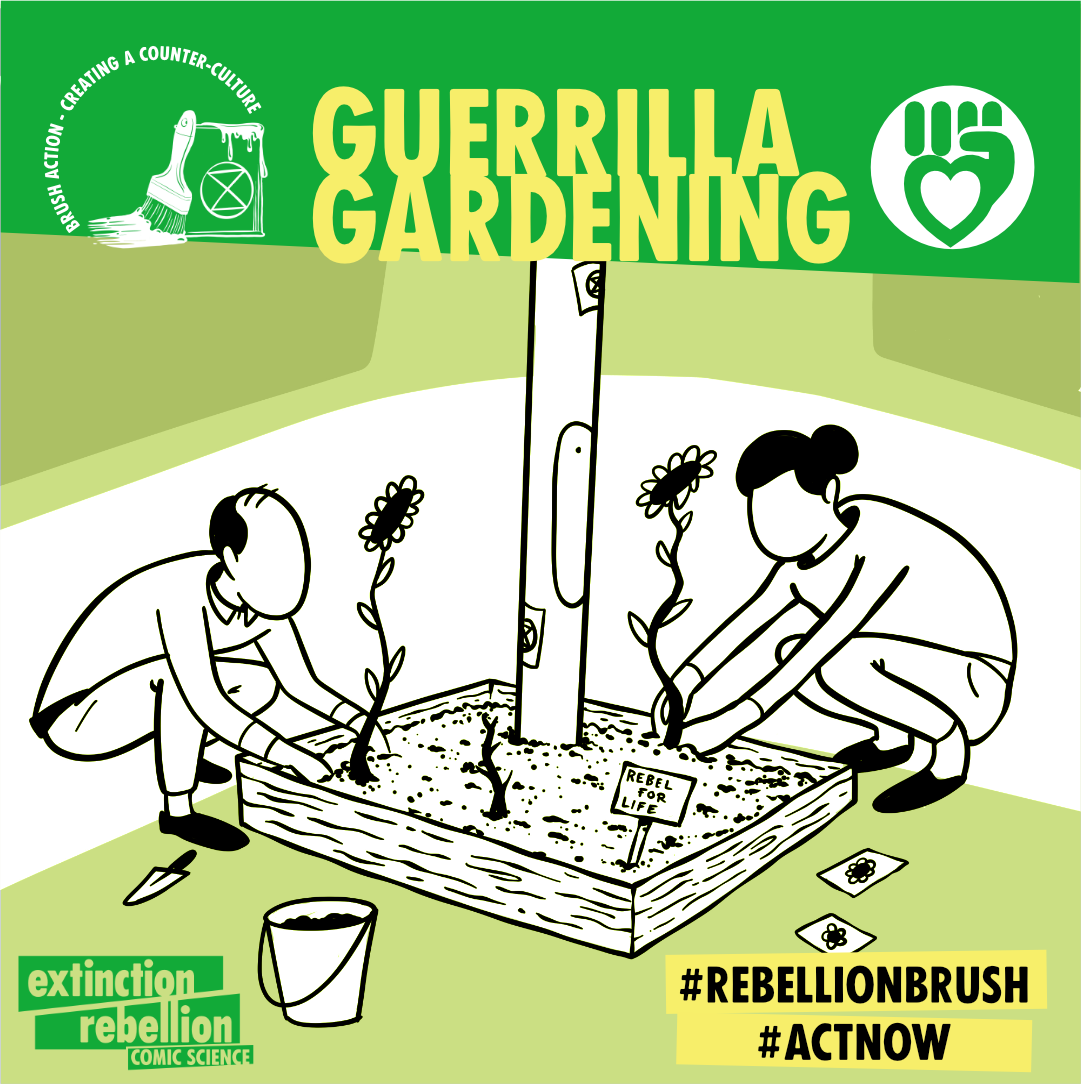 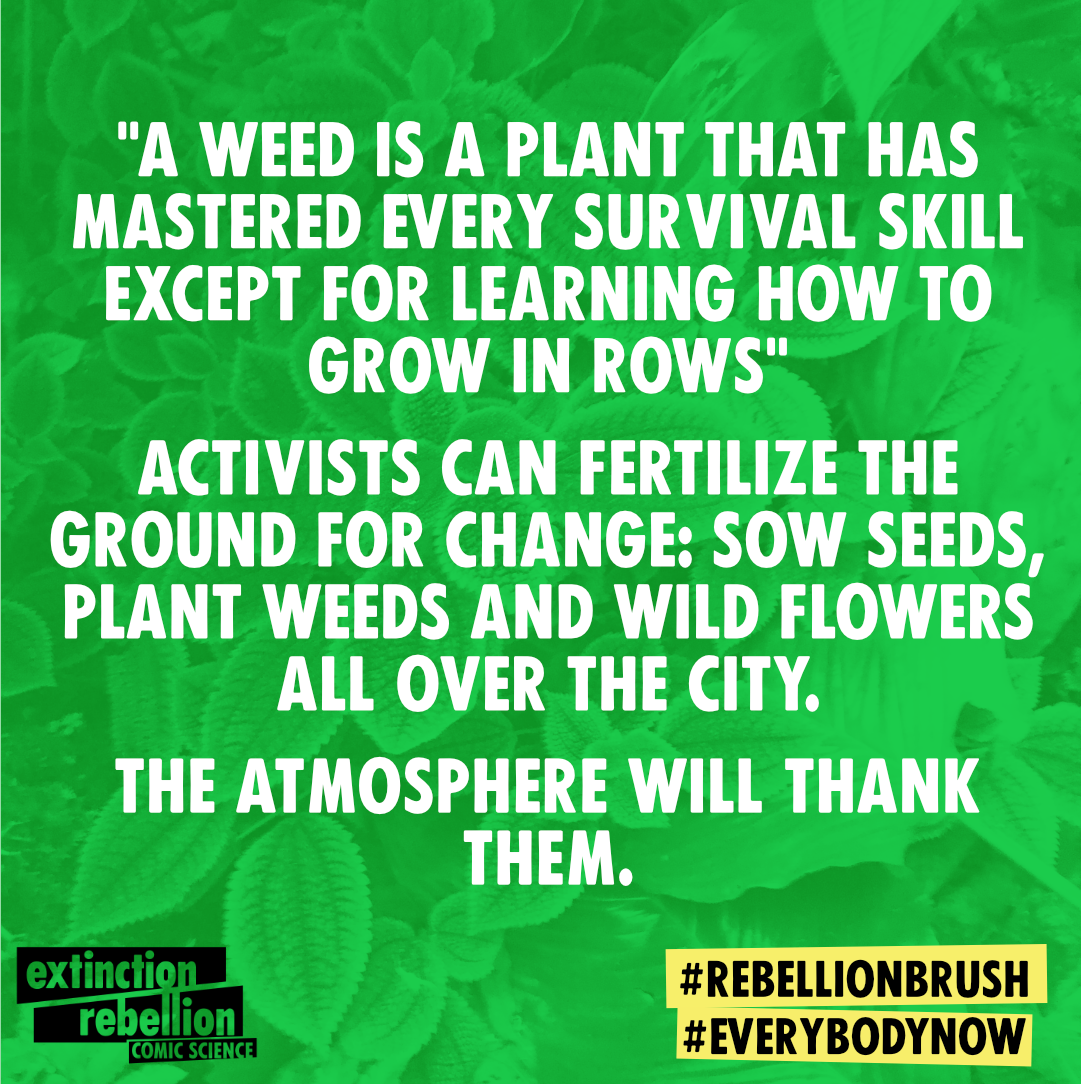 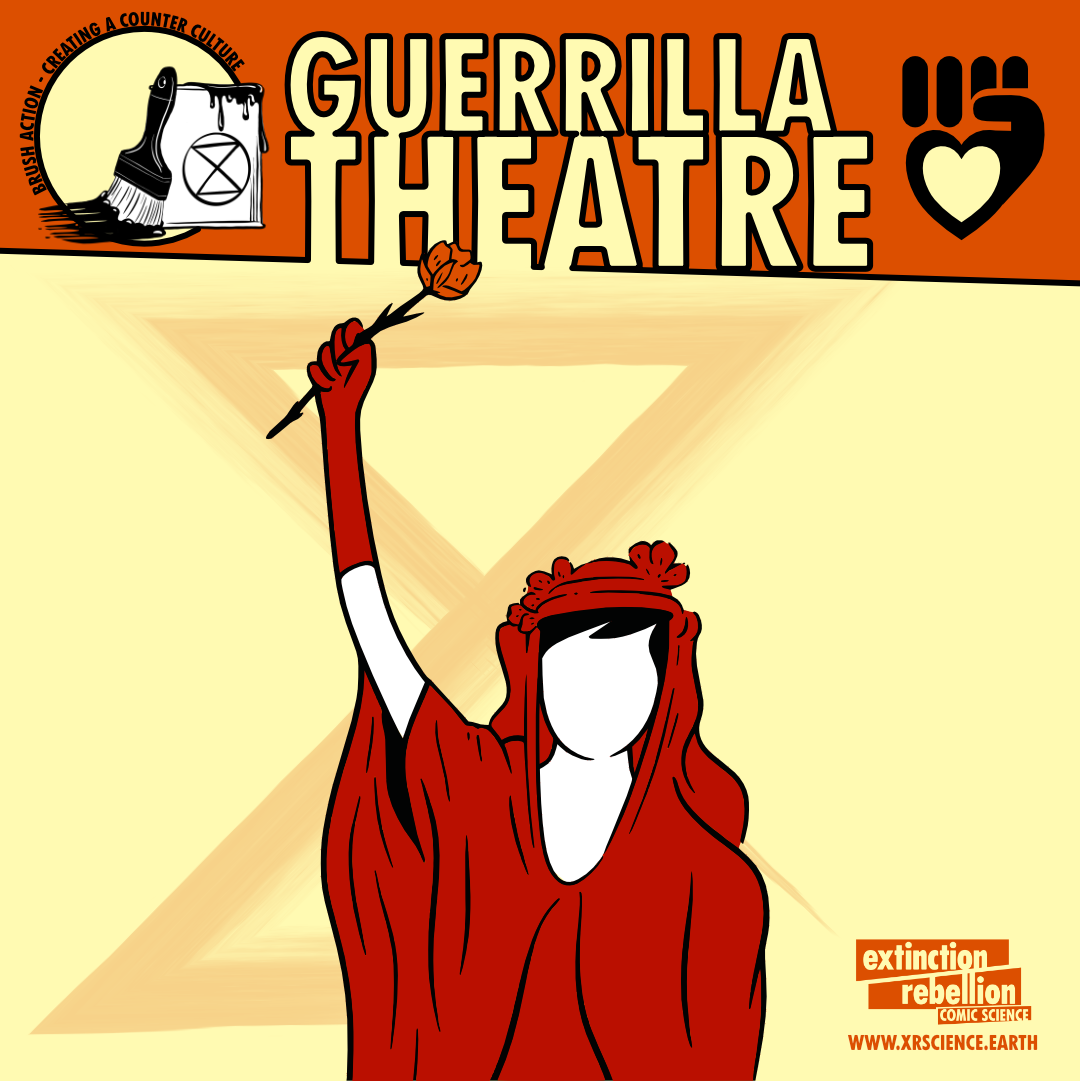 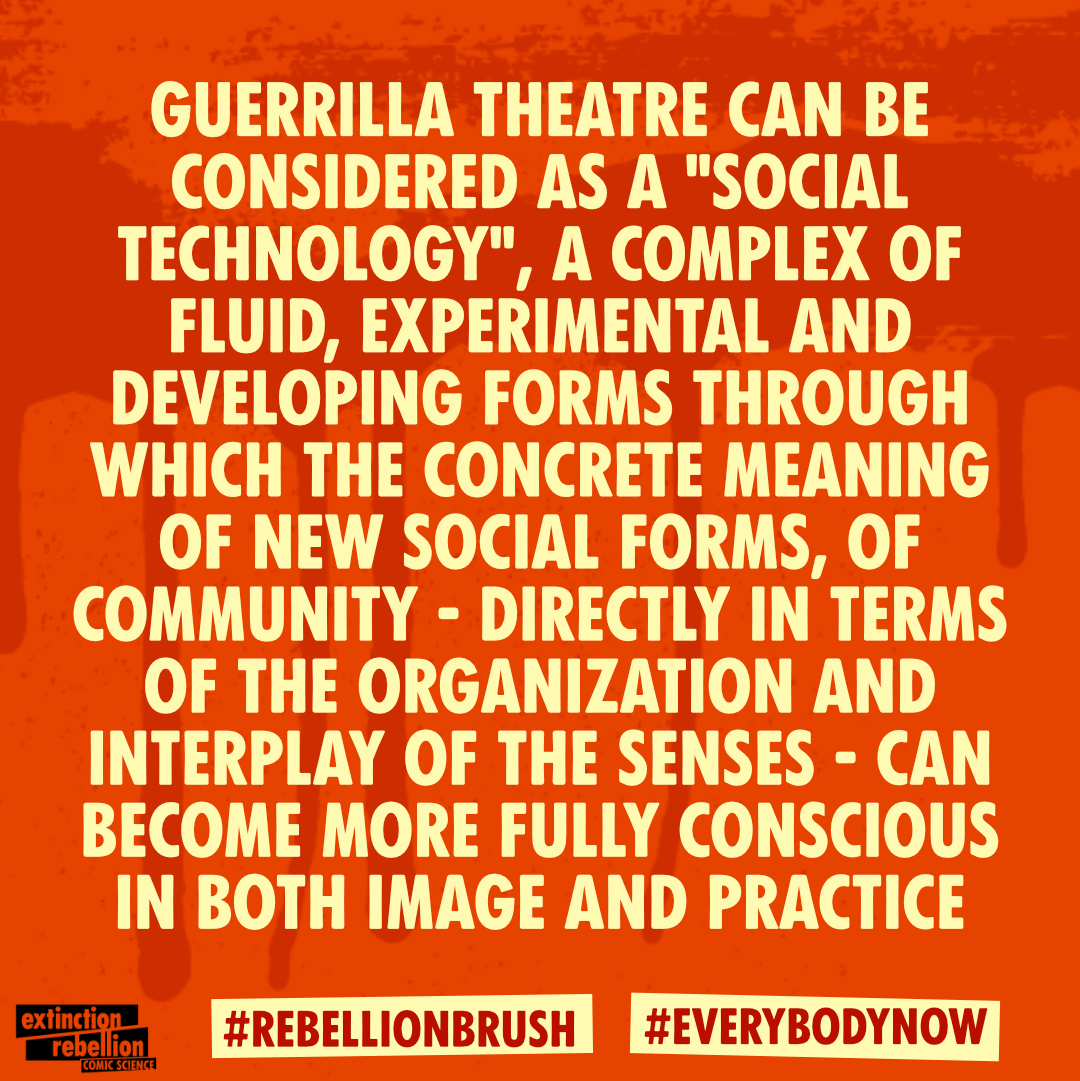 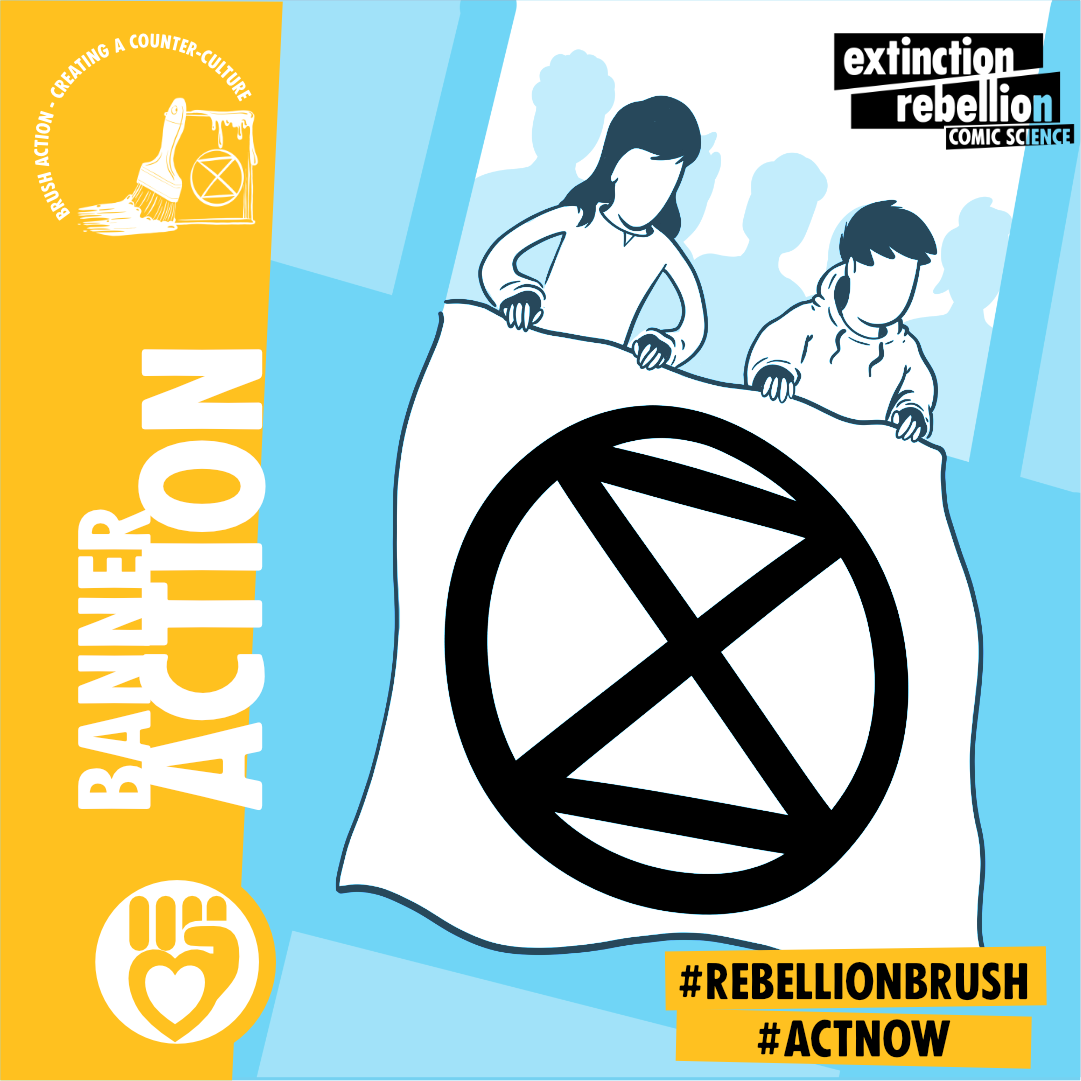 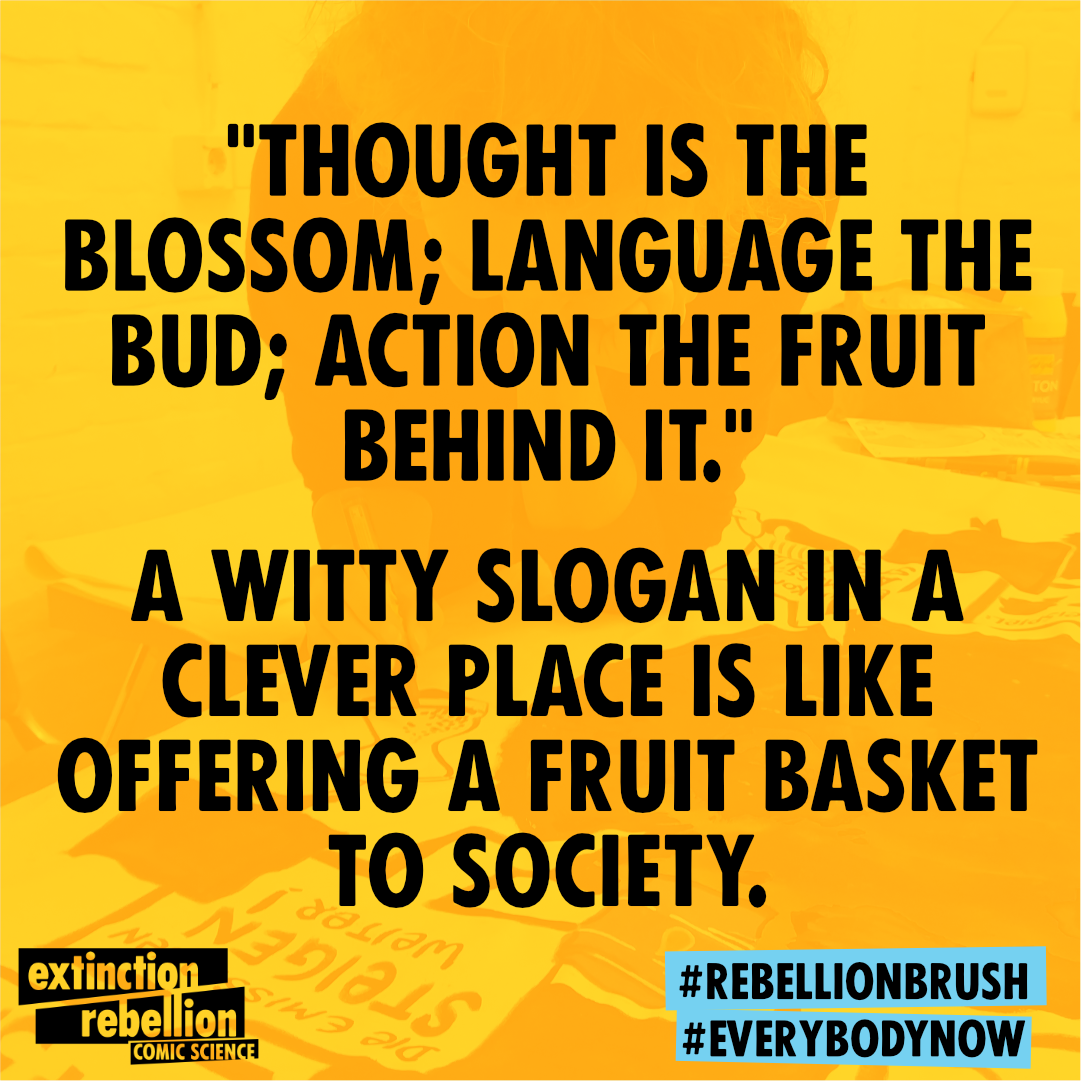 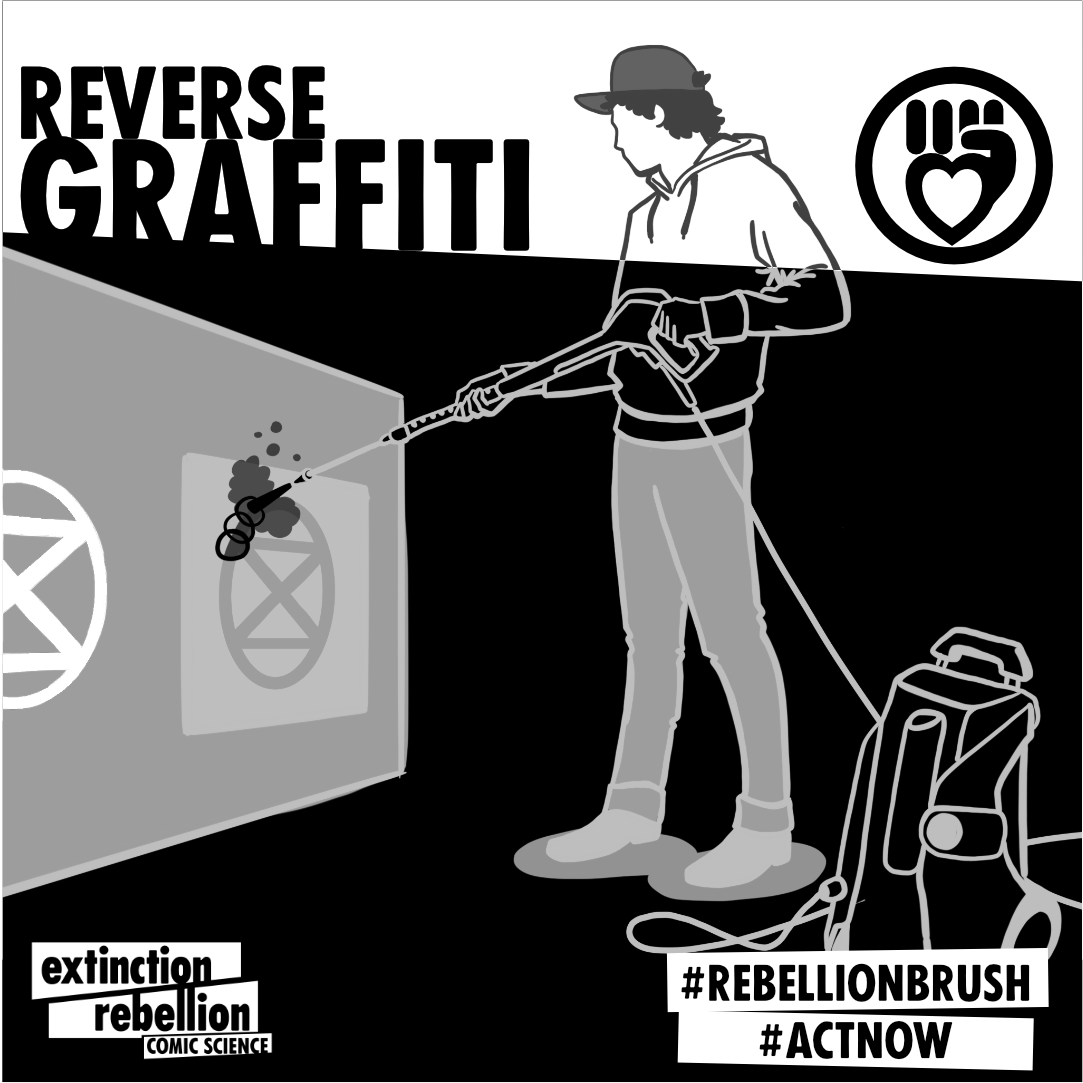 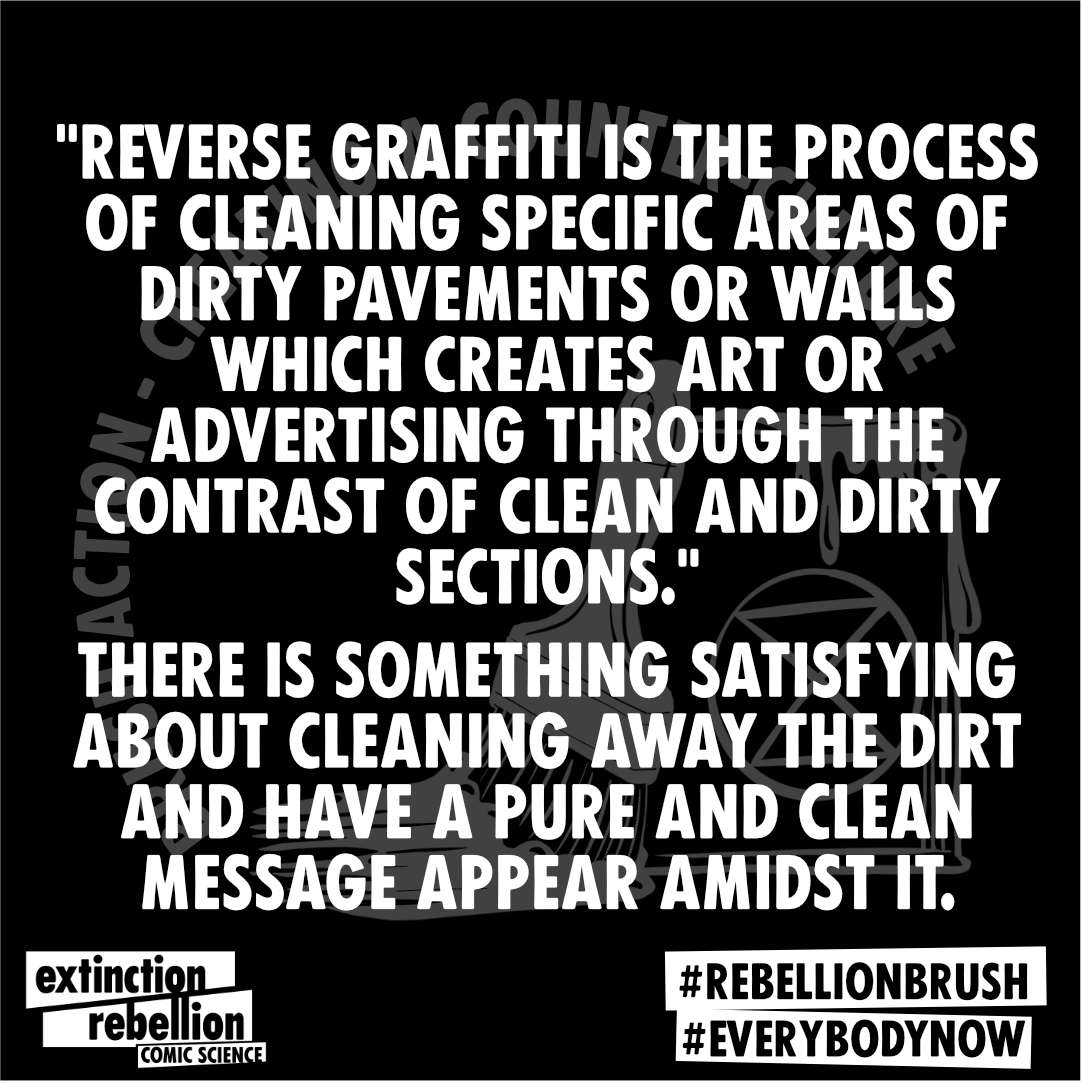 Painting the streets is a vehicle of resistance, a symbolic act, creating the substance of the “volcanic eruptions of protest”! It achieves its goal when it touches the conscience of viewers through challenging the current social and political order. Street art, to be effective, must be disruptive, thought-provoking!

“A weed is a plant that has mastered every survival skill except for learning how to grow in rows.” Activists can fertilize the ground for change: sow seeds, plant weeds and wild flowers all over the city. The atmosphere will thank them.

“Guerrilla theatre can be considered as a ‘social technology’ – as a complex of fluid, experimental and developing forms through which the concrete meaning of new social forms, of community (directly in terms of the organization and interplay of the senses) can become more fully conscious in both image and practice.”

“Thought is the blossom; language the bud; action the fruit behind it.”

A witty slogan in a clever place is like offering a fruit basket to society.

“Reverse Graffiti is the process of cleaning specific areas of dirty pavements or walls which creates art or advertising through the contrast of clean and dirty sections.” There is something satisfying about cleaning away the dirt and have a pure and clean message appear amidst it.

Megaphone actions: evoking attention for the cause

Megaphone-Actions are all about evoking attention for the cause. Did you witness one? Post it on Instagram and tag it with #rebellionmegaphone. 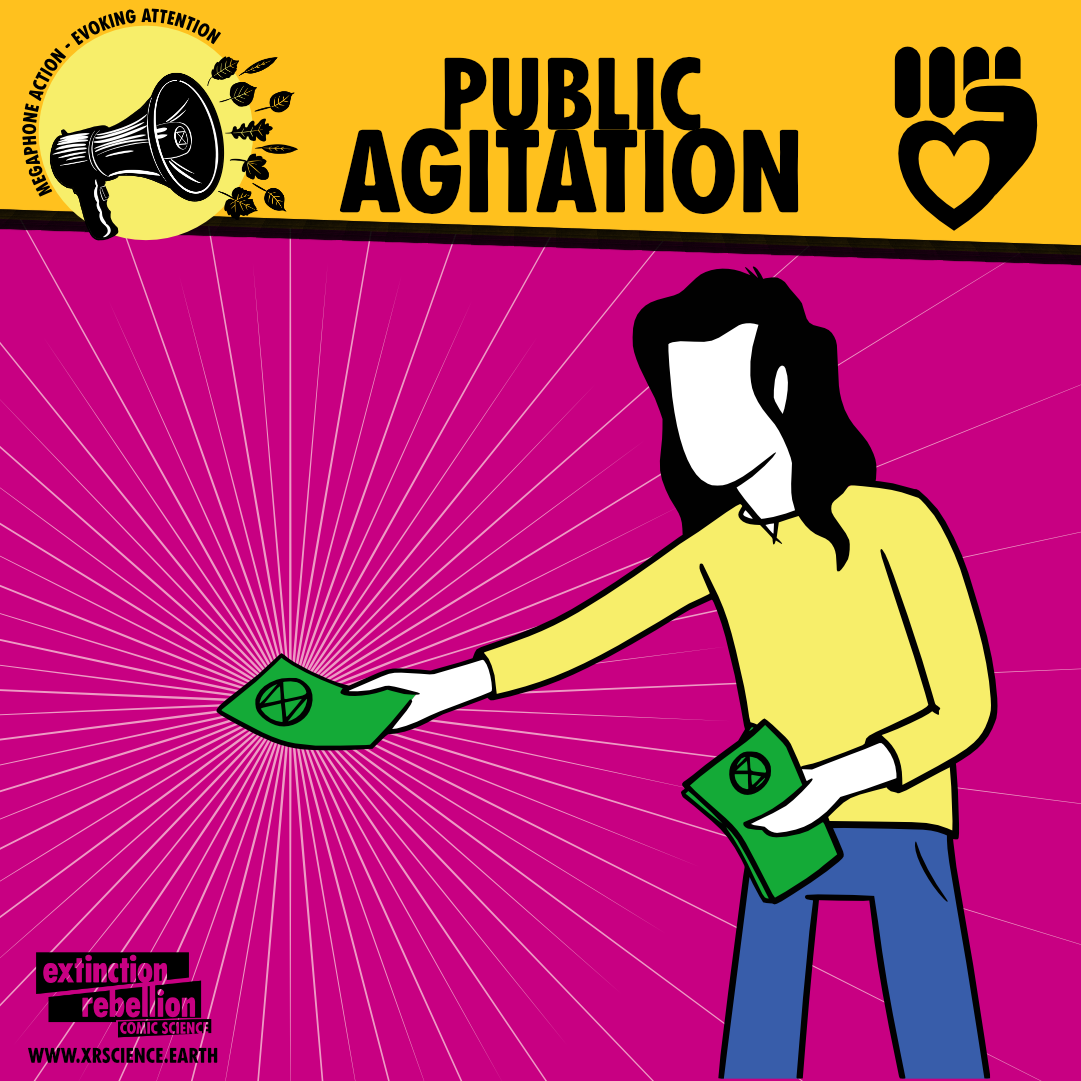 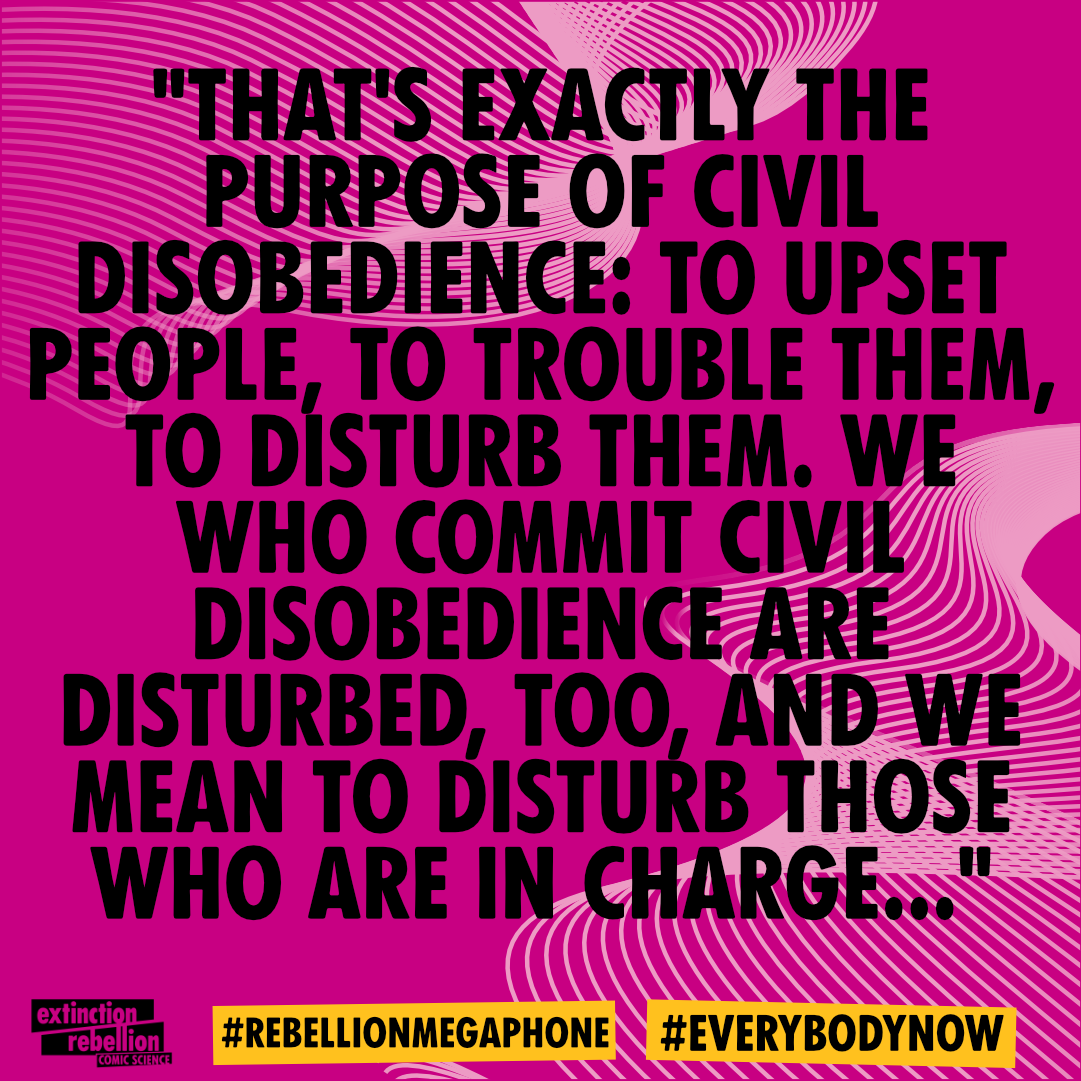 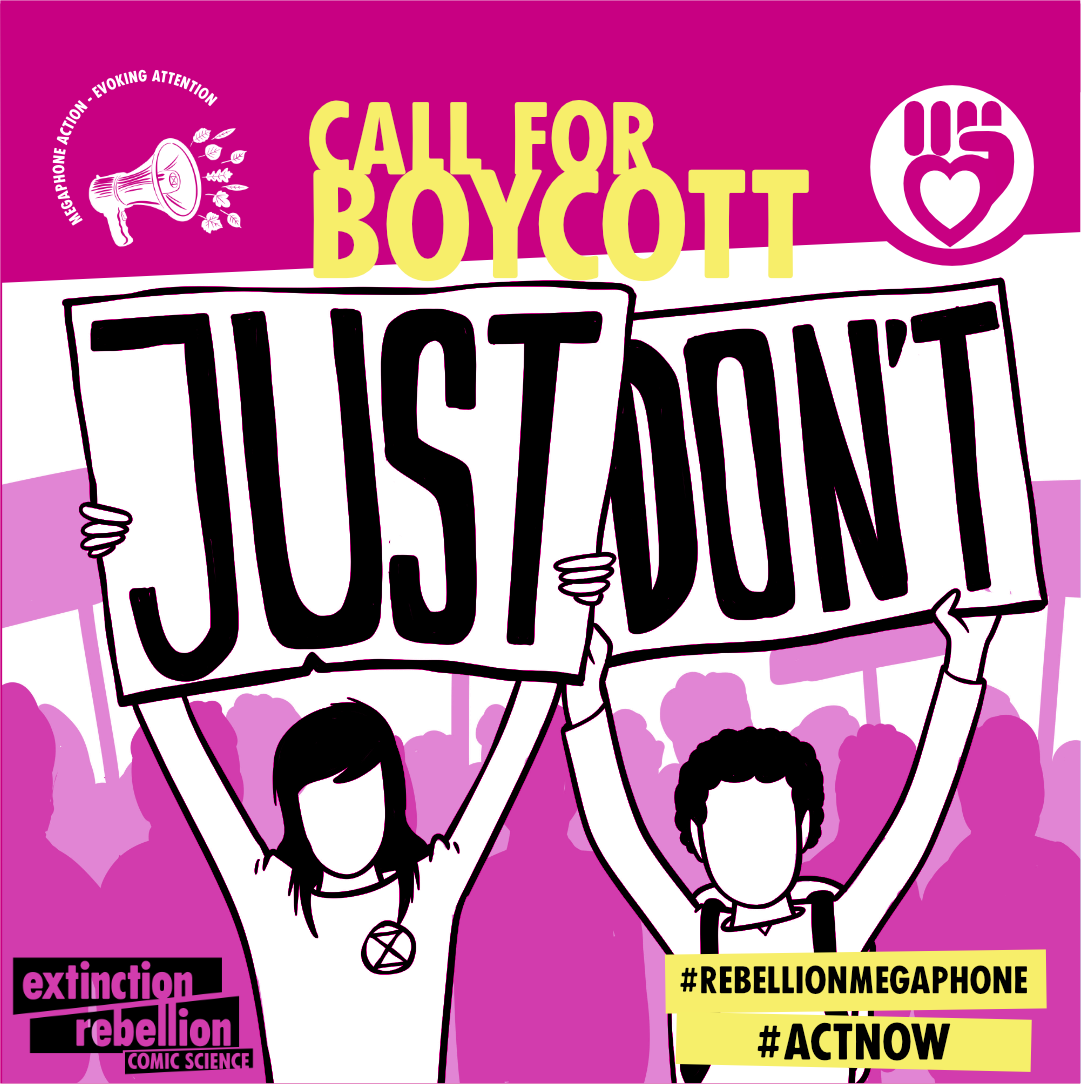 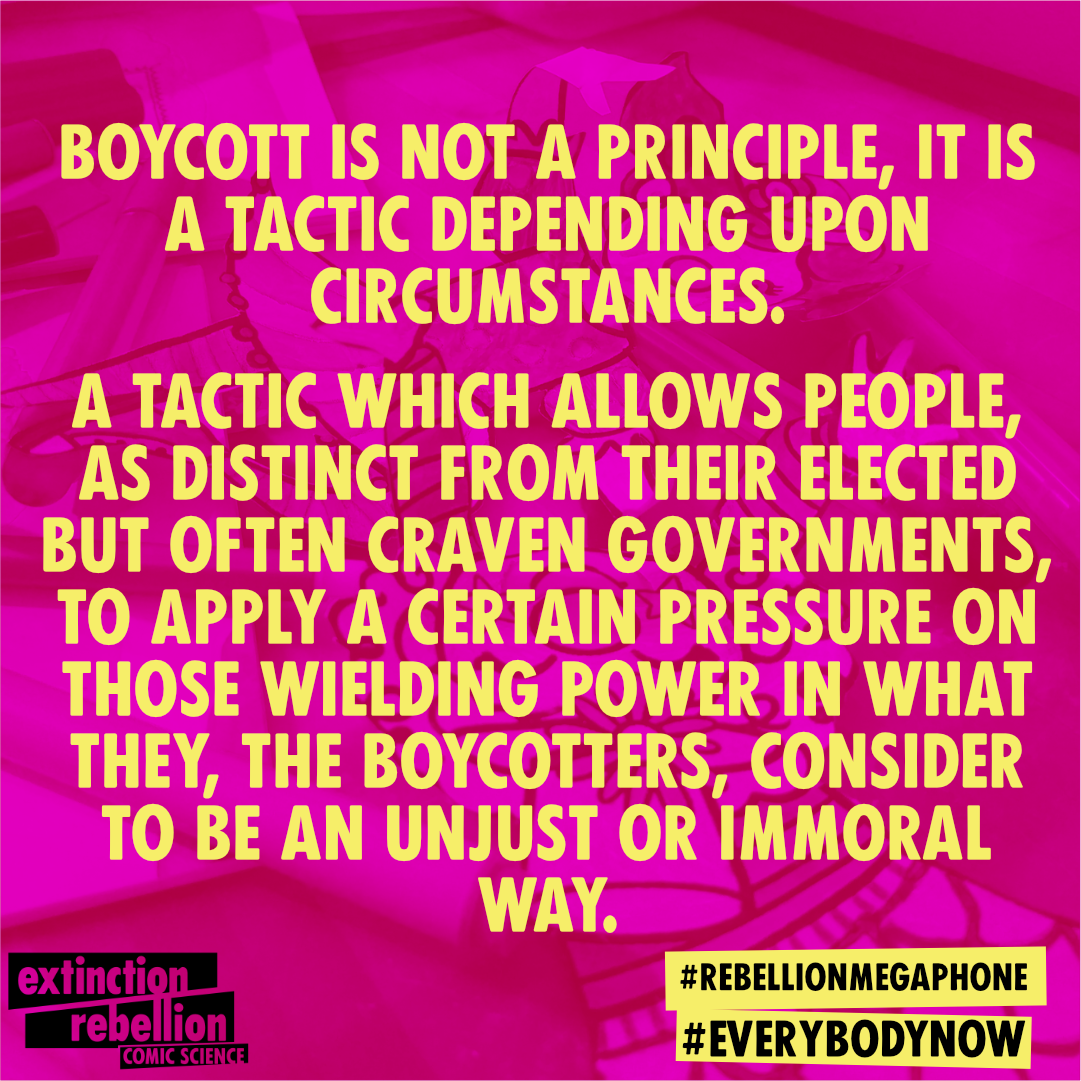 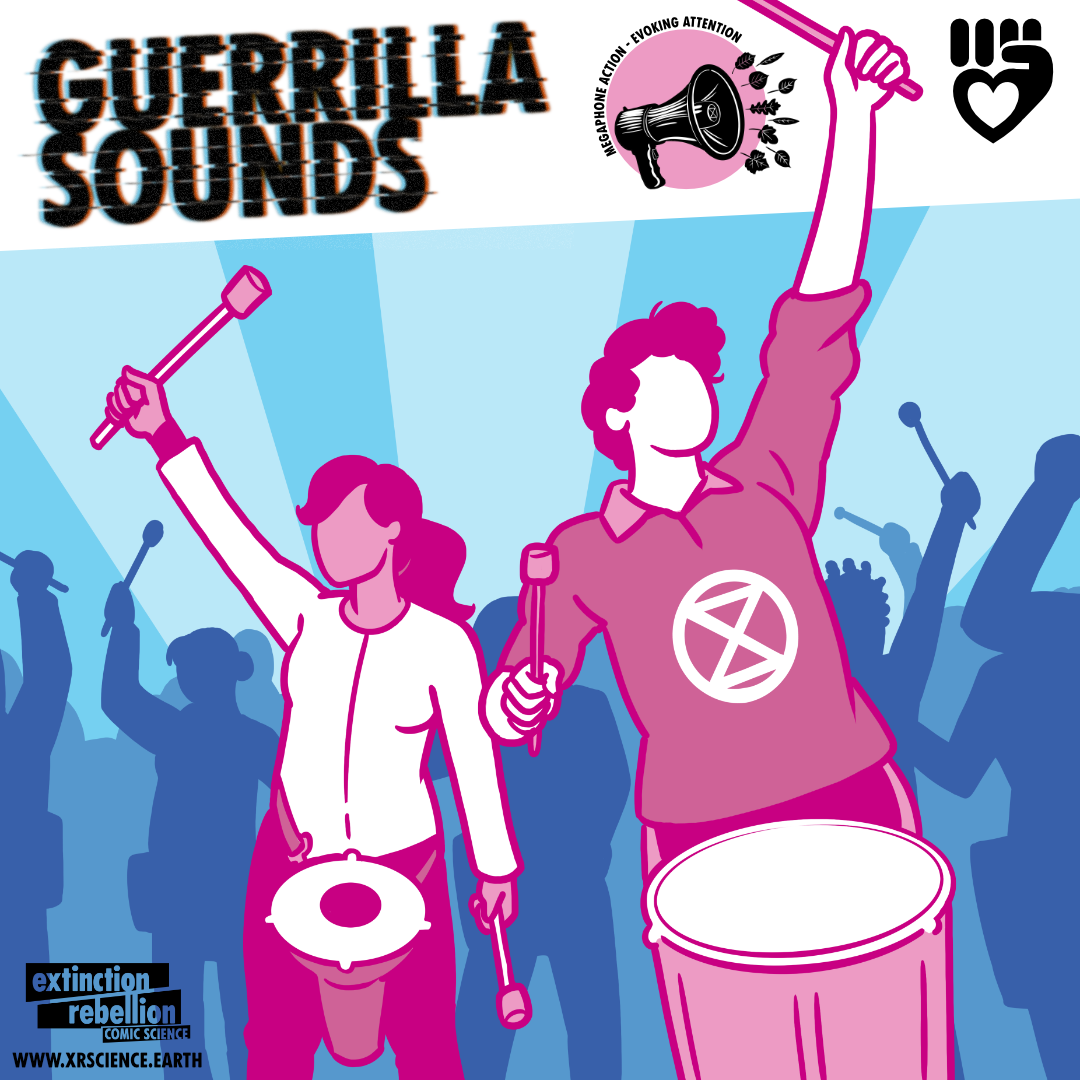 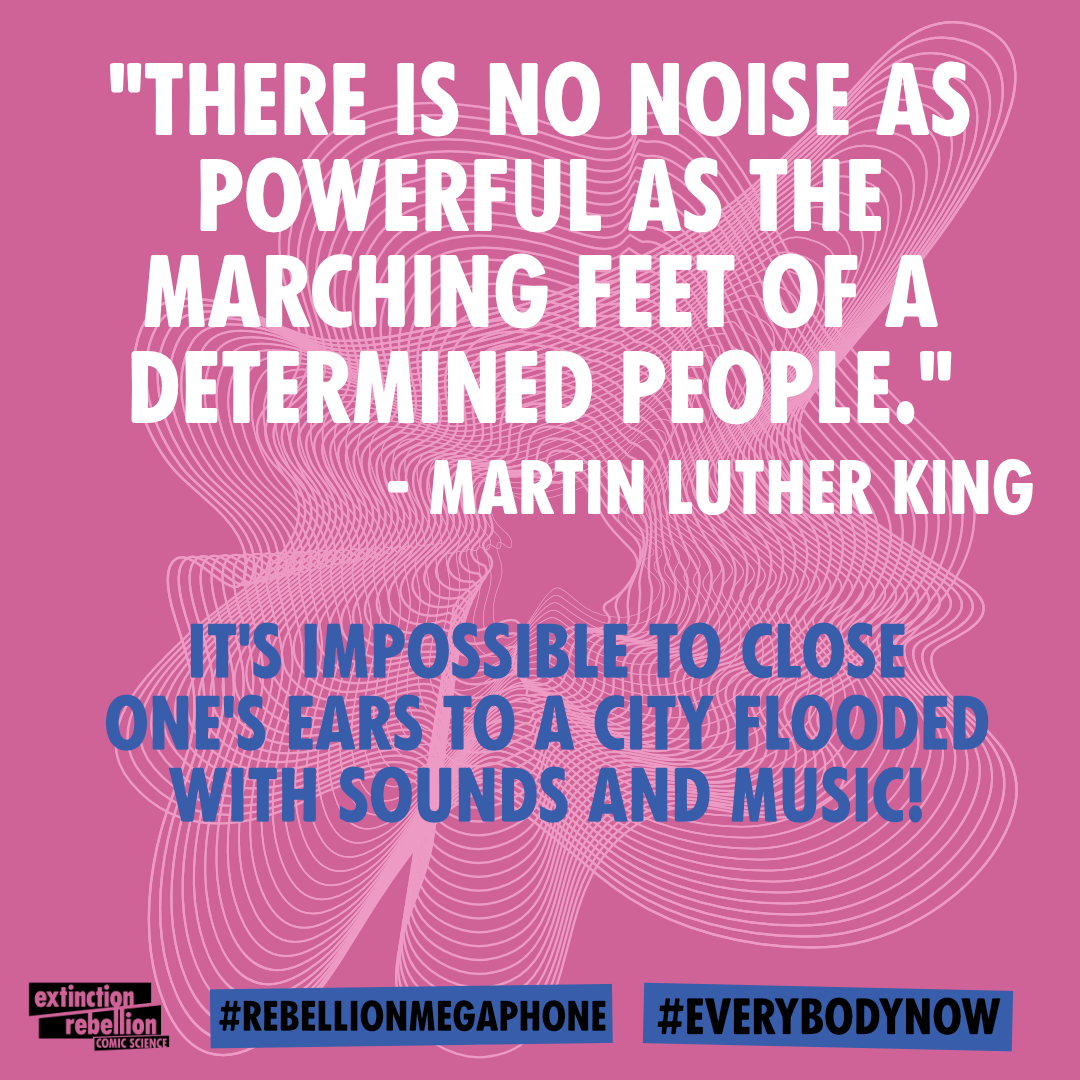 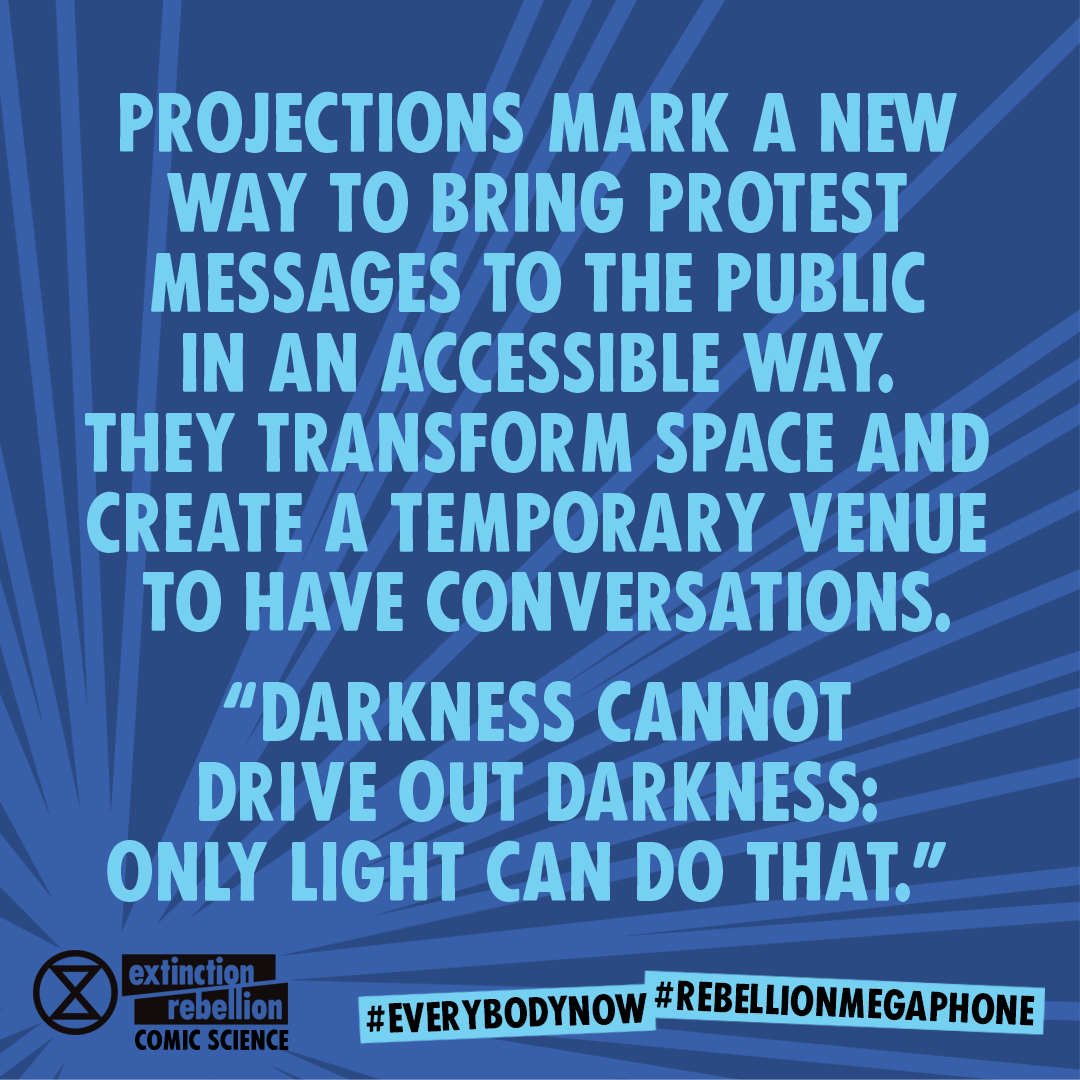 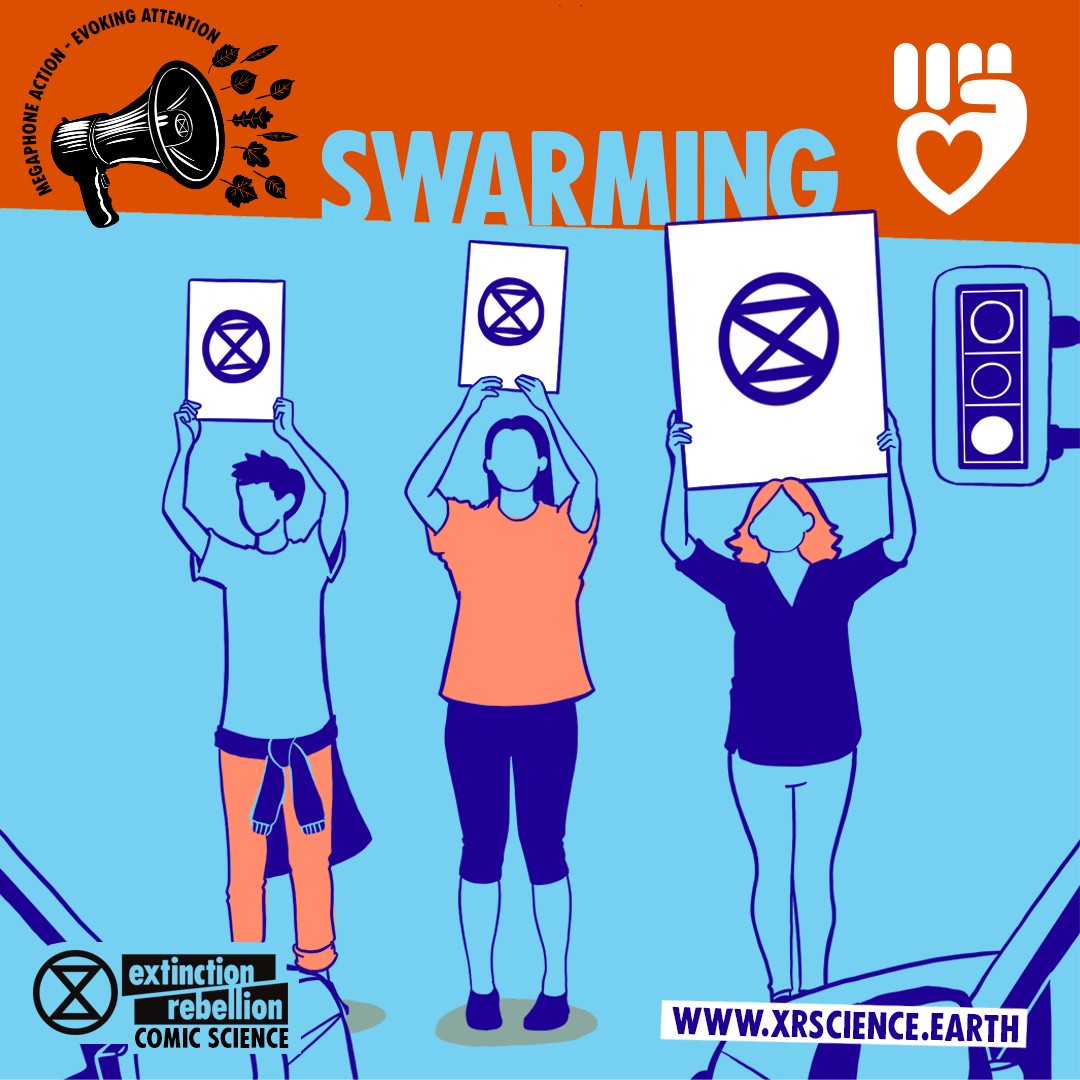 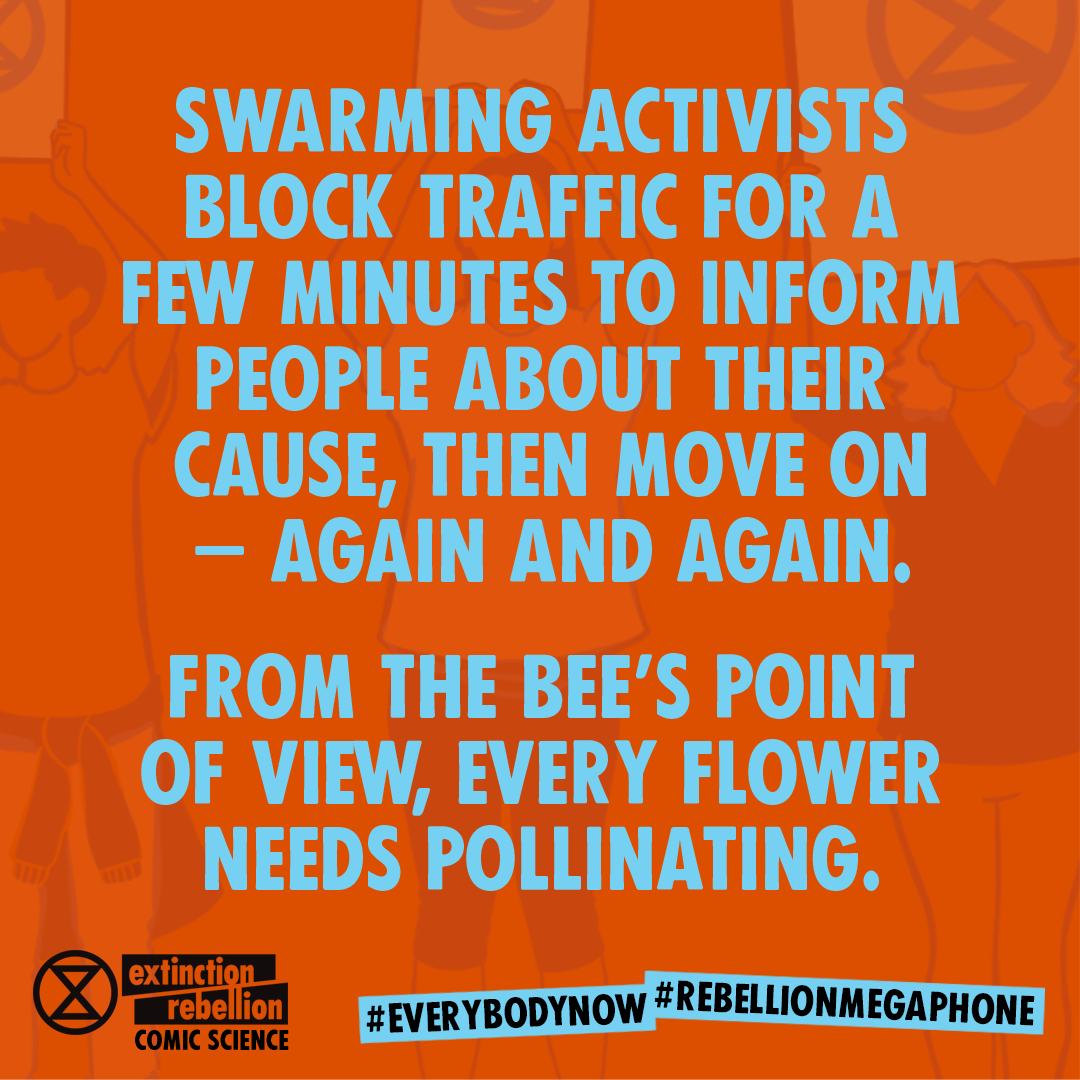 Boycott is not a principle, it is a tactic depending upon circumstances. A tactic which allows people, as distinct from their elected but often craven governments, to apply a certain pressure on those wielding power in what they, the boycotters, consider to be an unjust or immoral way.

“There is no noise as powerful as the marching feet of a determined people.” It’s impossible to close ones ears to a city flooded with sounds and music.

It’s impossible to close ones ears to a city flooded with sounds and music.

Projections mark a new way to bring protest messages to the public in an accessible way. A large-scale projection, transforms space, and it creates a kind of temporary venue to have these conversations. “Darkness cannot drive out darkness: only light can do that."

Swarming activists block traffic for a few minutes to inform about their cause, retreat, and then advance – again and again. From the point of view from the bee, every flower needs pollinating.

Saw-Actions are all about disrupting the business-as-usual. Did you witness one? Post it on Instagram and tag it with #rebellionsaw! 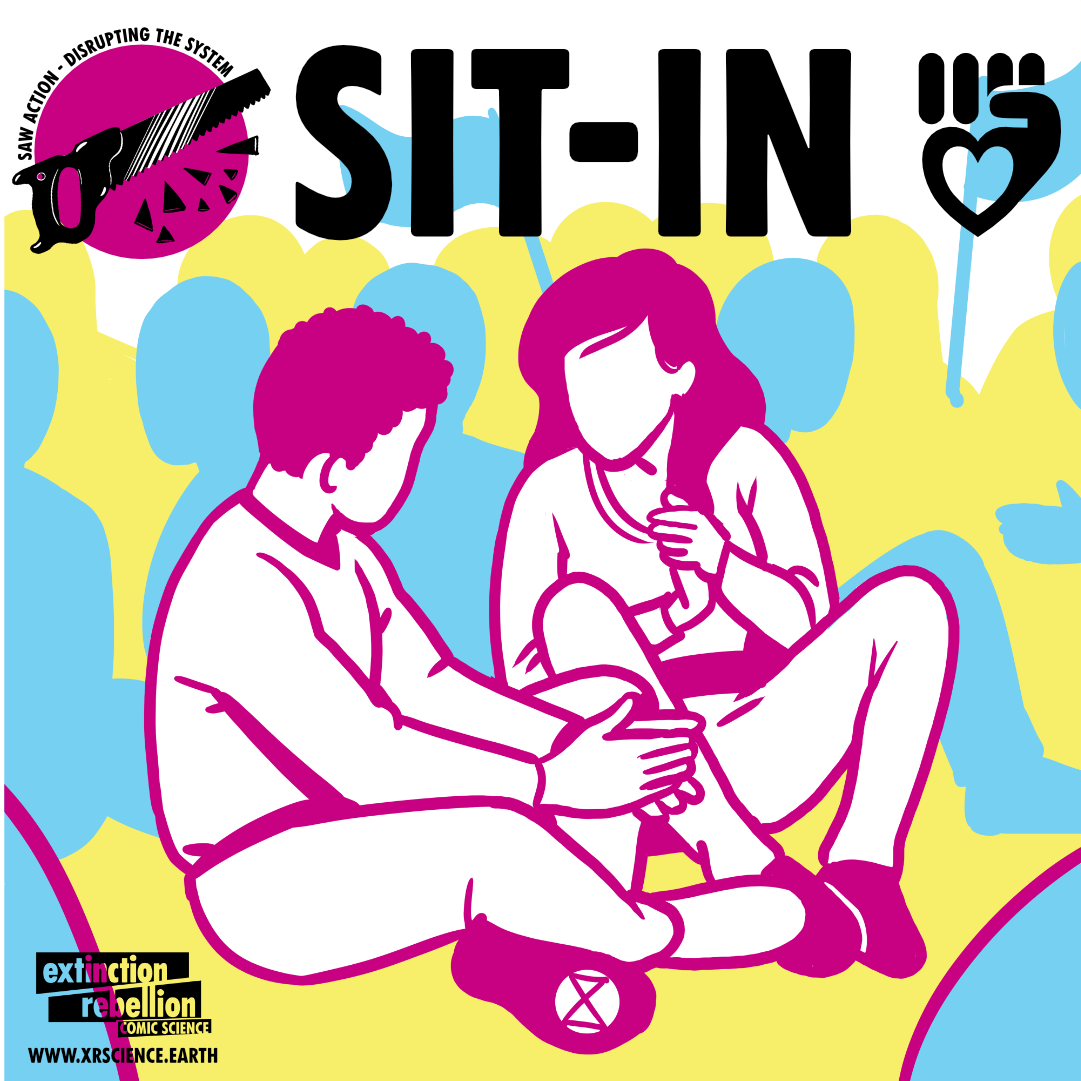 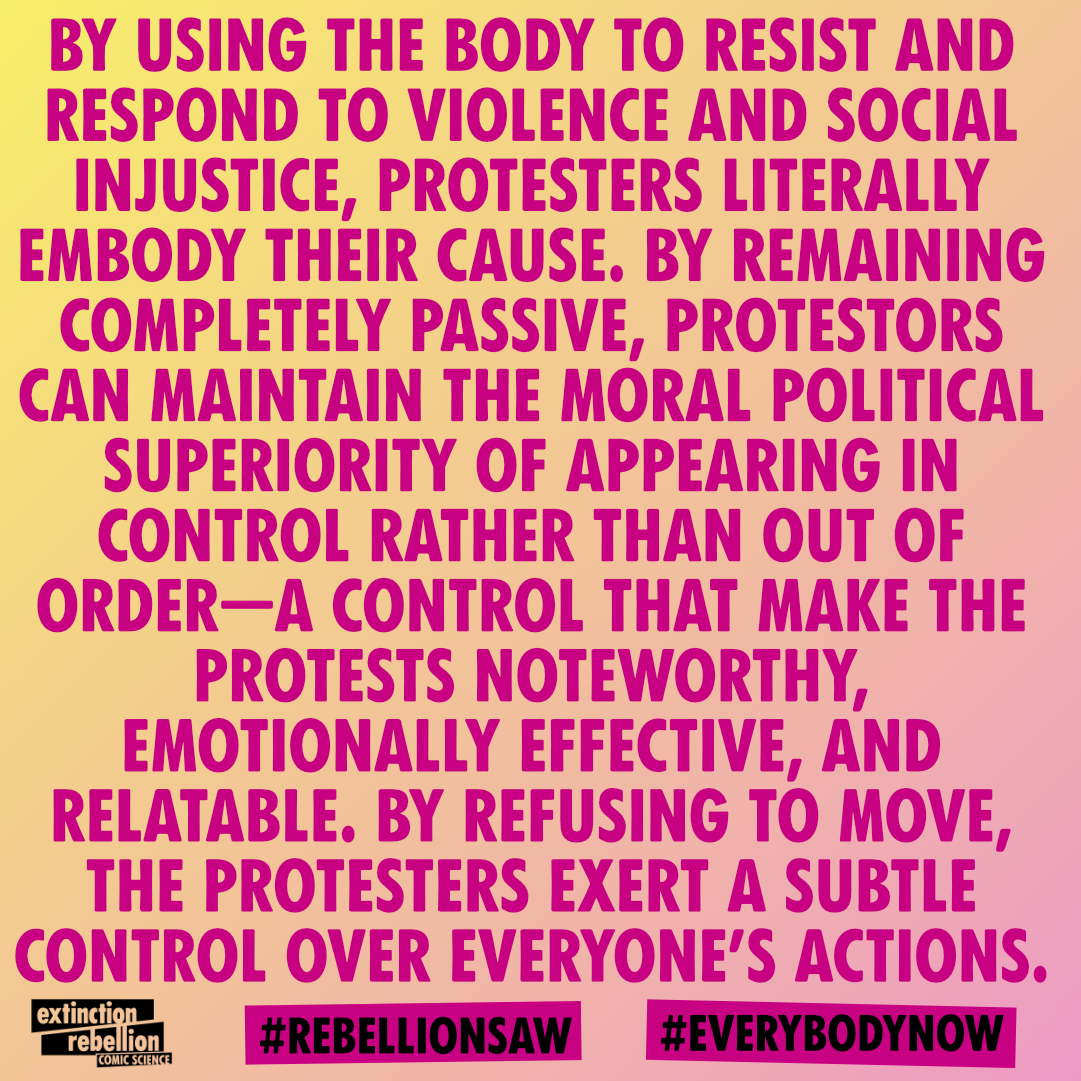 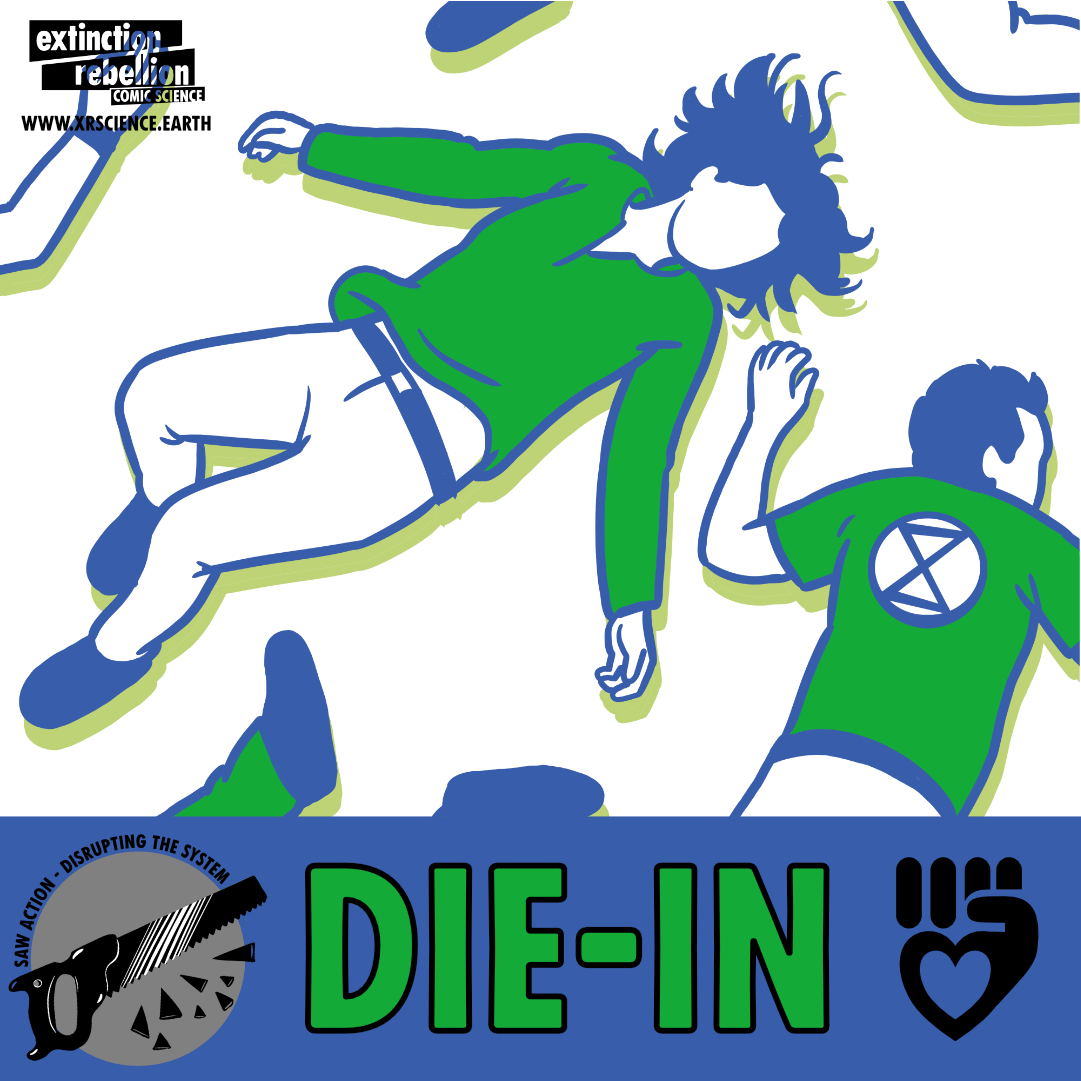 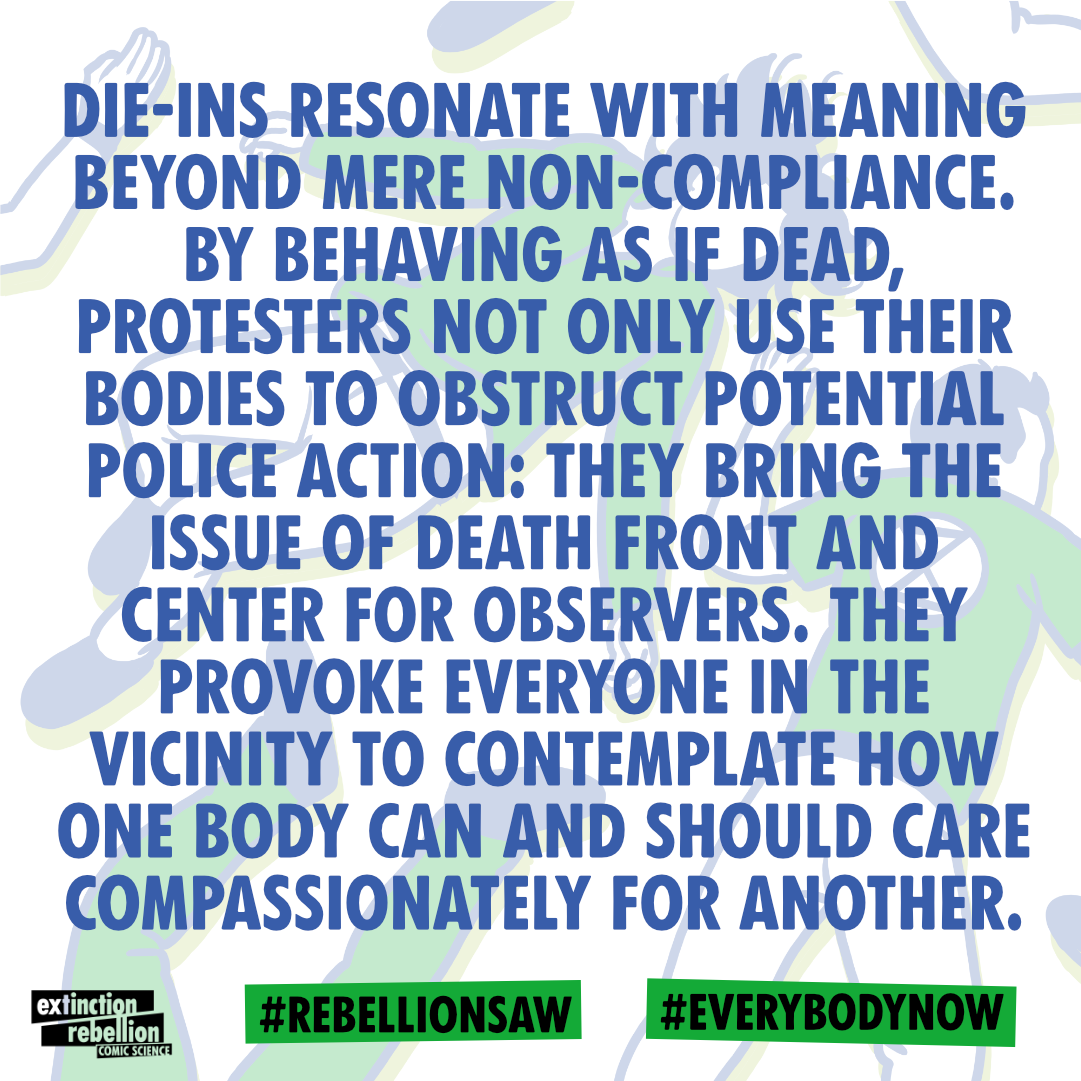 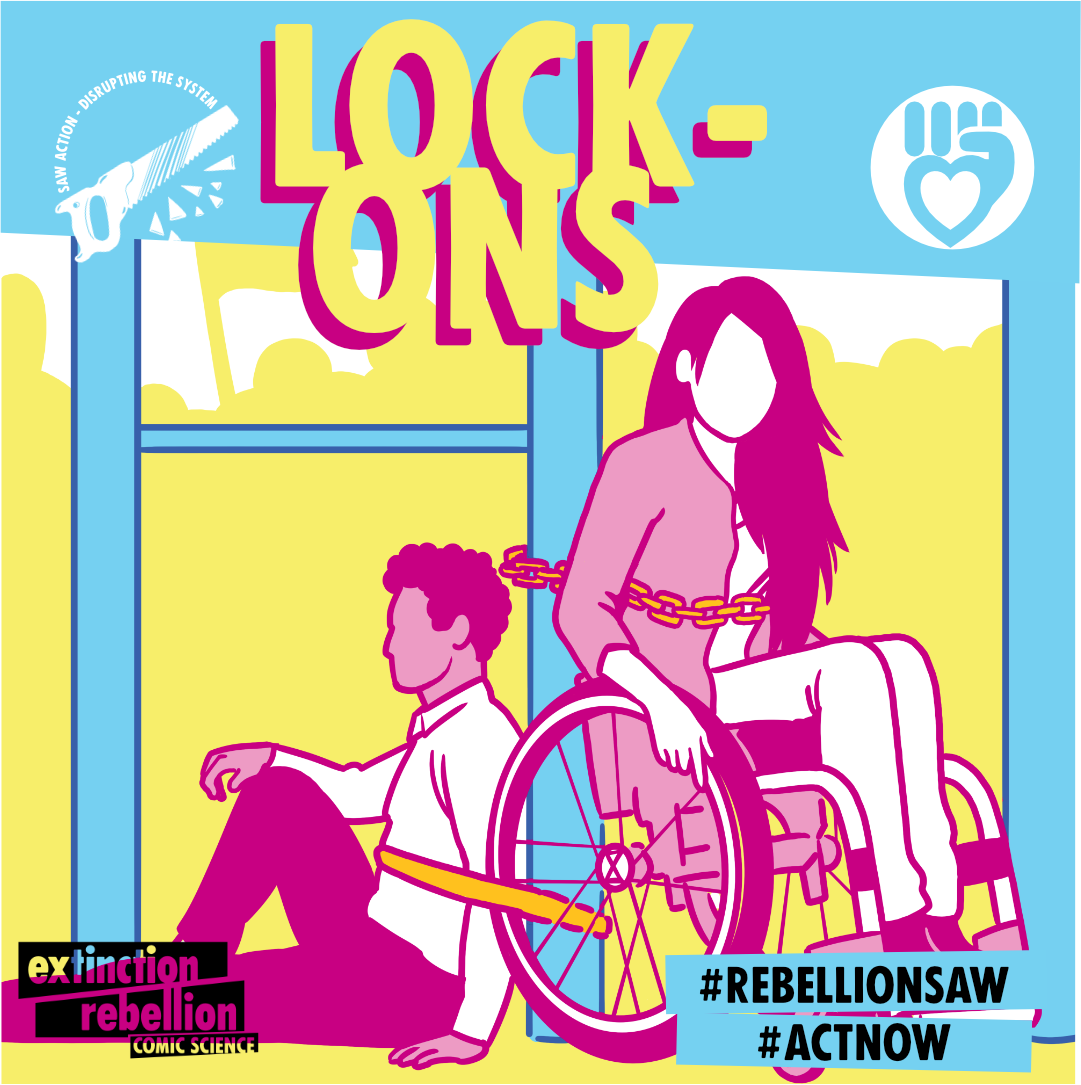 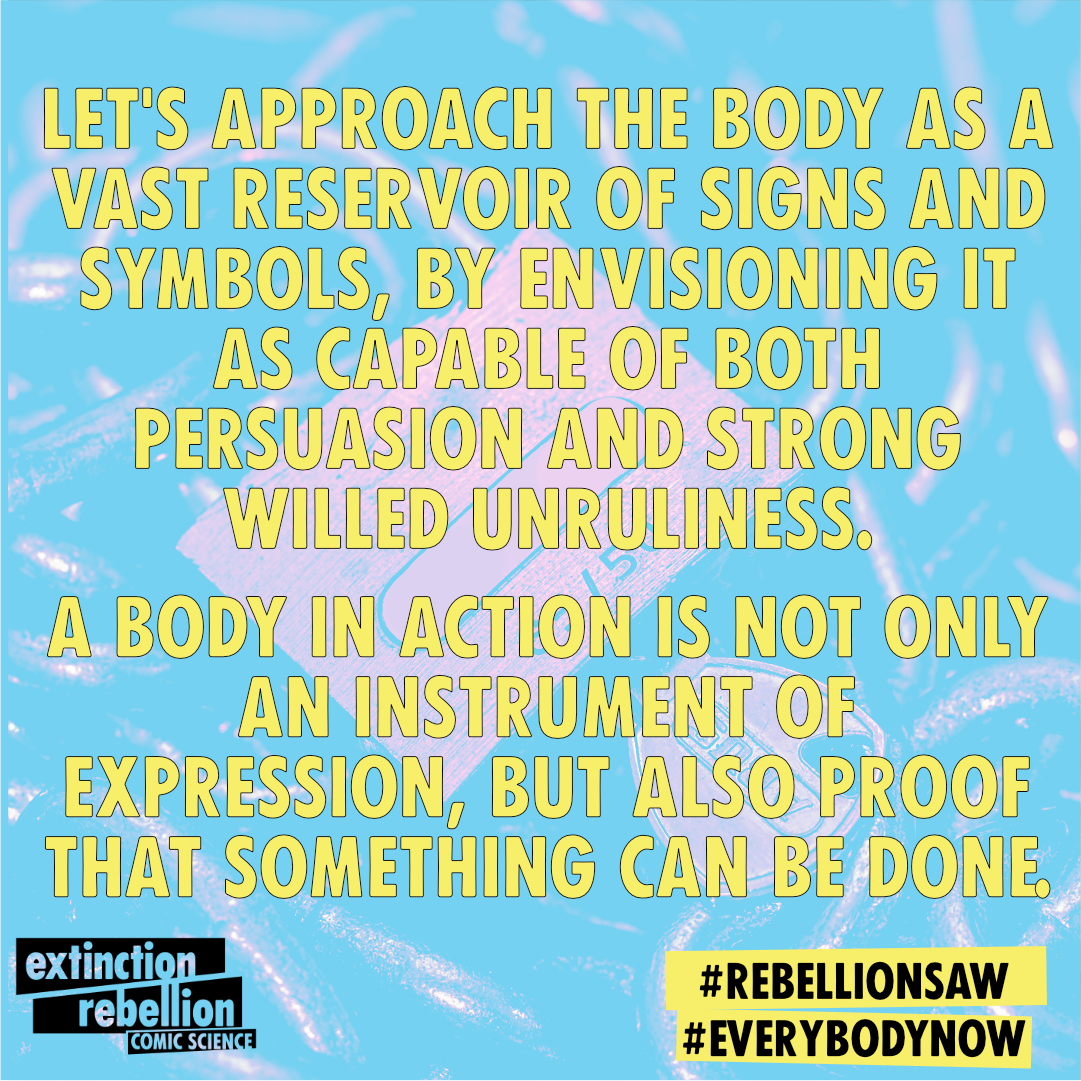 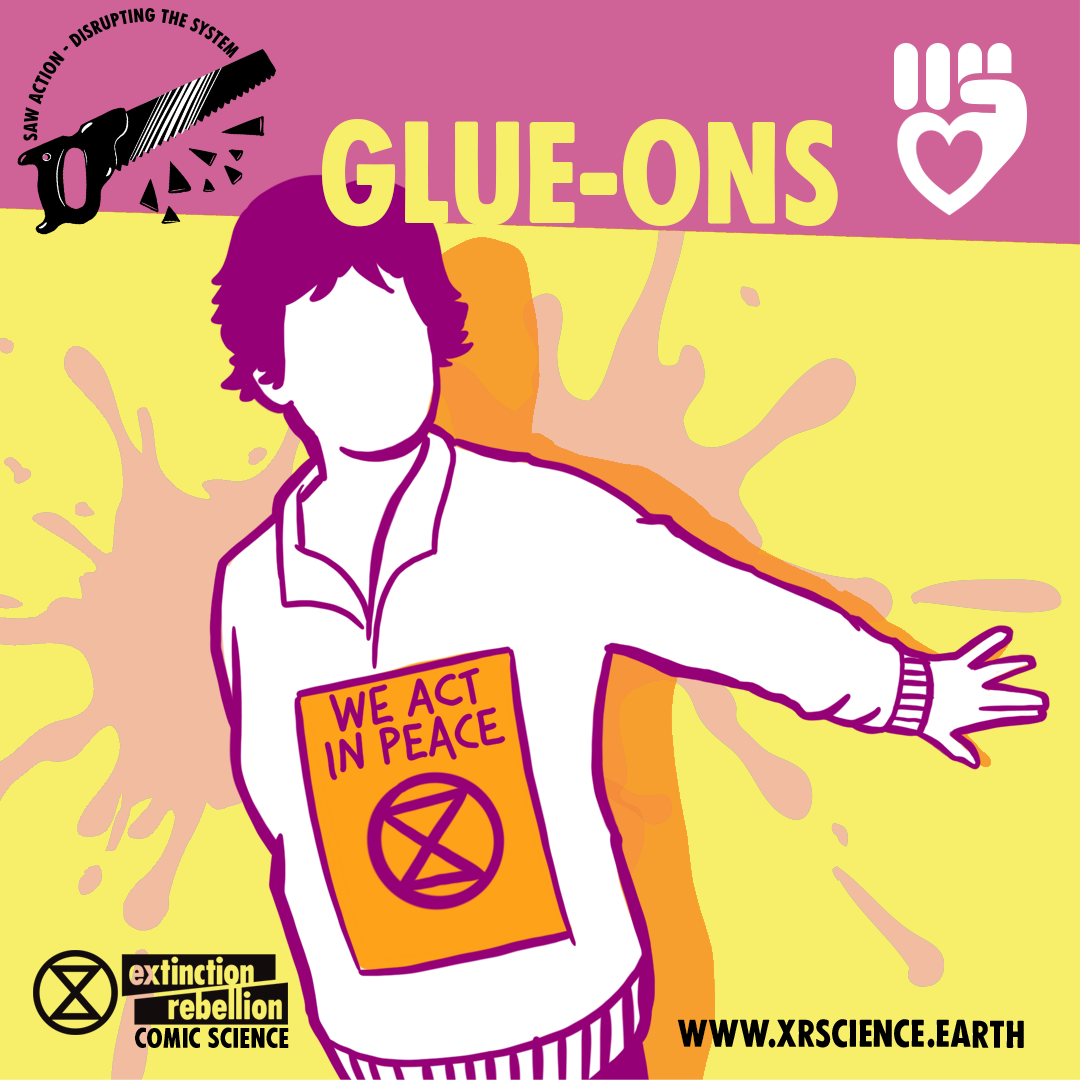 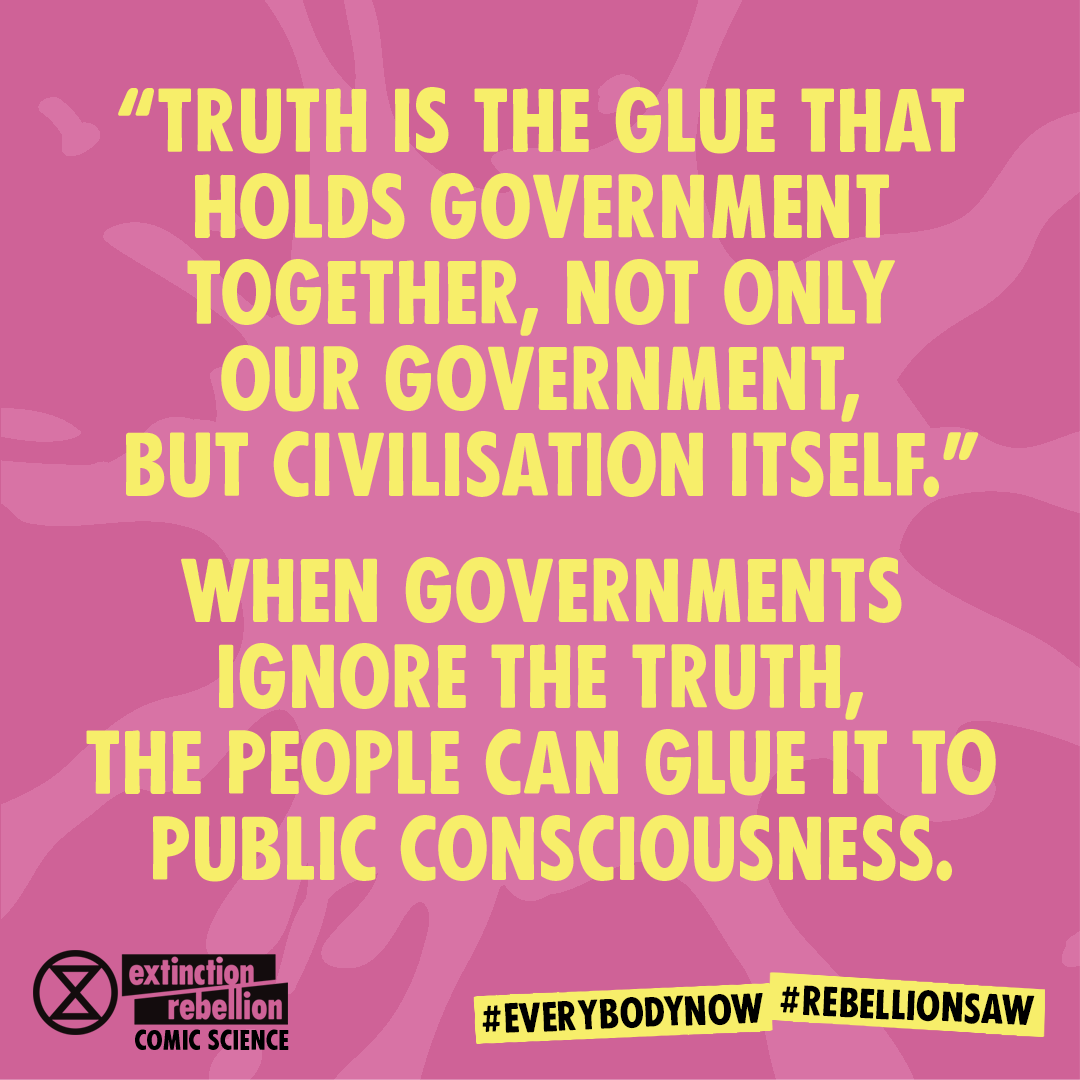 By using the body to resist and respond to violence and social injustice, protesters literally embody their cause. By remaining completely passive, protestors can maintain the moral political superiority of appearing in control rather than out of order—a control that make the protests noteworthy, emotionally effective, and relatable. By refusing to move, the protesters exert a subtle control over everyone’s actions.

Die-ins resonate with meaning beyond mere non-compliance. By behaving as if dead, protesters not only use their bodies to obstruct potential police action: They bring the issue of death front and center for observers. They provoke everyone in the vicinity to contemplate how one body can and should care compassionately for another.

Let’s approach the body as a vast reservoir of signs and symbols, by envisioning it as capable of both persuasion and strong willed unruliness. A body in action is not only an instrument of expression, but also proof that something can be done.

Everyone in a lock-on feels locked in, but can be set free.

"I believe that truth is the glue that holds government together, not only our government, but civilization itself."Where governments do not provide that glue, civilians themselves can make the truth stick to the public’s consciousness.

You can also right-click and choose “save target as…” to download the individual graphics below.